Conserving water is everyone’s responsibility and so is protecting our watersheds and ocean from pollution. 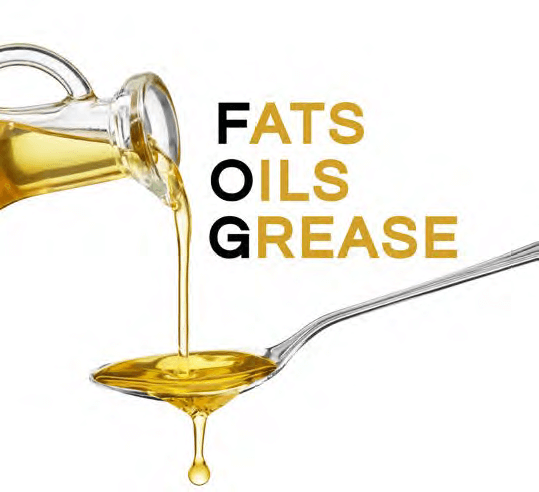 Did you know that what you do in your kitchen can impact the health of our local ecosystem and pose health risks for you, your family and neighbors?

It is as simple as how you dispose of your waste after you cook. When fatty waste from cooking is poured down the drain, it can solidify and block sewer lines, causing raw sewage to back up into your home, yard, streets and storm drains, eventually making its way into our storm water drain system, waterways, and the ocean.

The Tip of the Fatberg

Fats, oils and grease (FOG) do not break down in water, and even most soaps and other agents, like drain cleaner or detergent, can’t dissolve grease effectively enough to keep the sewer system clear.

Ask the City of Baltimore. A massive clog of FOG and other waste that had accumulated in a sewer main near Baltimore’s Penn Station was to blame for an overflow that dumped some 1.2 million gallons of sewage into the city’s local watershed. A much larger “fatberg” was also discovered in London, which was some 820 feet long, blocking a stretch of sewer more than twice the length of two soccer fields. According to experts, potentially infectious bacteria including listeria, campylobacter and E coli was found in the London fatberg. This not only poses an immediate risk to city workers cleaning out the sewers, but also to the public since it could backup the system and cause sewage to flood homes and businesses.

While there are no major fatbergs lurking under the streets of Santa Ana, FOG can block your home’s pipes and wreak havoc.

Pan to the Can

You can also do other things to keep your drains FOG-free, such as use a sink strainer to catch food items like bacon and fried chicken that contain FOG and can cause clogs and messy overflows.

You can download a FOG FAQ (Frequently Asked Questions) in English and Spanish.

To Flush or Not To Flush

While not FOG, another major culprit to sewage blockages are “flushable” wipes. Wet wipes don’t break down in water. So put them in the trash instead.